I used to be pro-choice 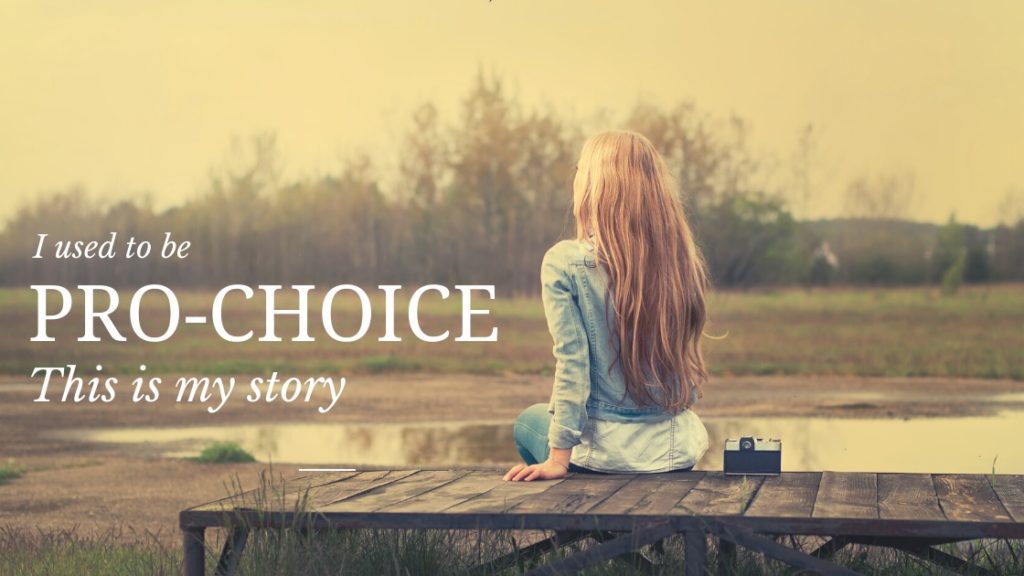 My story is one of a change of heart. A story of deep transformation. It is not unique, but it is mine.

It all started in middle school when I learned about abortion for the first time. The class was called “civic education”, which has now been renamed to “civic and moral education”. As the teacher began talking, I attentively absorbed his words. He presented abortion as a fundamental right that women had long fought for and had finally won. Say goodbye to back alley abortions performed in unsanitary conditions that led to death. He said the lack of freedom when it comes to motherhood was gone too. Women now had full bodily autonomy and were able to choose for themselves what they wanted from life. A short debate ensued, during which everyone agreed that for all these reasons, legalizing abortion was clearly necessary. It goes without saying that the way the class approached the topic was completely one-sided. Not once did we mention the embryo or fetus, let alone its nature. We didn’t try to examine potential alternative solutions to the problem of back alley abortions either. The case was closed.

So presented like this, my 13 or 14 year old self was all for abortion. To give you some context, I grew up in France, in a very secular and liberal environment. My guess is that abortion was already deeply ingrained in culture and society, hence it didn’t come across in conversations frequently. To this day, the content of this class’s segment has pretty much stayed the same. The objective, word for word (but translated) is still to “show that the legalization of abortion have met society’s demands”. To be honest, not much from this hour of class stuck with me. My focus was divided between school, friends, as well as dreaming about boys (not sure in what order), so I had no time left to investigate serious and complex life issues.

A couple years later, however, I remember watching a TV show in which a strong female character revealed to a friend that a previous illegal abortion she had undergone scarred her for life and made her sterile. “What a horrible thing”, I recall thinking. Not that I liked babies very much at that age or that I even imagined having one, but the sheer grief in her eyes pierced me. This event pushed me to do my own research. But none of what I could find online made me question my stance. It actually reinforced it. I didn’t need to wonder whether the “pregnancy” was a baby or even a human being, because everything I read said otherwise. And even if it were, it didn’t matter to me. My mind was set.

Moving forward and I am now 21, talking to a friend about love, dating, as well as pregnancy. To my surprise, she said that if she were to get pregnant, she would keep the baby because she thought she was old enough. My answer was immediate: “What? If it were to happen to me, I would no doubt have an abortion!” Another event happened that year, though, and it would be the tipping point in my path towards becoming pro-life. That same year, I decided, without being truly convinced (that is another story), to invite Jesus Christ in my life. What a crazy move from a girl who professed to be a categorical atheist! But why not? What did I have to lose?  I had no idea what I would discover and how much it would change my entire life. I now believe that from that very moment, God started working in my heart, piece by piece, without me noticing.

And so a year later, I had a first indication that something different was happening inside me. I was surfing online and came across a discussion on abortion. The question was “are you in favor or against abortion?”, and unsurprisingly, the majority of respondents were supportive of legal abortion. What struck me though was the way they talked about the “clump of cells” involved in a pregnancy. I started feeling uncomfortable, heavy, and quite disturbed by their messages, but I didn’t understand why. After all, I was fully pro-choice too. My astonishment led me to do more research on embryology, as well as how abortion impacted women. Was it really the only way to prevent women from dying? Did it really free them from oppression? And also, what is an embryo? I studied developmental biology by buying and reading an entire embryology textbook and taking free classes online, I read the testimonies of women who had abortions, such as Abby Johnson, Patricia Sandoval, and other, anonymous women on the internet. I read “The Case For Life” by Scoot Klusendorf and other, similar books. And I questioned, layer by layer, everything I was told and deemed to be true.

For the very first time, I was open to another possibility. I was willing to actually listen to those who held different views on abortion, without any preconceived judgment in mind.

My research and journey towards transformation made me feel guilty, as I slowly started to reconsider my position. As I began to consider myself “pro-life”. But it didn’t stop my curiosity. After months of investigating and analyzing both sides of the argument, I was finally comfortable in calling myself pro-life.

How did I finally get there? It wasn’t a unique event, but instead a series of small realizations. I’m someone who loves digging, understanding, and reasoning on complicated issues. Comprehensive research was what I needed to finally discover that babies in the womb are just as human as any of us. To find out that in reality, women do not benefit from abortion and that it’s our responsibility to strive for better. To not just be pro-life, but pro-abundant life.

I believe that God had planted a seed in my heart that had gradually flourished and allowed me to discern that I had been conditioned to support abortion. But I had never fully tested this stance and all the research I had done previously was shallow.

I don’t think that being a Christian is needed to see the truth, but I’m not sure that I would have felt the first spark without Him. That spark who became a fire and completely changed my worldview, not just about life, but also about love. He is the One who made me understand how precious relationships are, how sacred sexuality is, and how beautiful the commencement of life is. John 8:32 states: “And you will know the truth, and the truth will set you free.”

I still feel a little uncomfortable sharing my pro-life position today, because I know how much of a bad reputation it has. But I decided to work for Lifeline to spread the word effectively. I want every woman to feel safe and supported, knowing that an unintended pregnancy is not the end of the world. I want every person to understand that unborn babies are just people like us and that we are not fragments. From the moment of conception to the day we die, we are whole.