Tickets for the May 14, 2021, concert will be available for purchase in mid-March. Please check back with us soon! 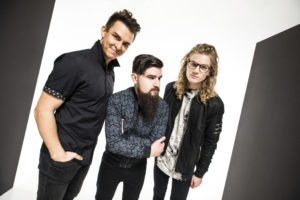 Children under 5 admitted for free

Door price: $20/ticket (for tickets purchased day of the event)

All tickets are non-returnable, non-refundable.

When Ben Calhoun started Citizen Way, he could never have foreseen the path that’s led them to where they are today. From their college band beginnings in the Midwest to becoming a voice of hope heard throughout the world, the mission of Citizen Way – lead singer/guitarist Ben Calhoun, drummer David Blascoe and guitarist/background vocalist Daniel Olsson –has never wavered.

“We want to be like Billy Graham with a guitar, sharing the Gospel with as many people as we can,” Ben says. The members of Citizen Wayconsider themselves “musicianaries,” or musicians with a missionary-like calling. “It’s not just music for music’s sake; it’s music with a message,” David says. “We write and sing about the things that we do because of the impact they’ve had on our lives, and we want to share that.”

Citizen Way’s mission is evidenced in their radio hits, “Should’ve Been Me,” “Nothing Ever (Could Separate Us),” “How Sweet The Sound,” “When I’m With You,” and “Bulletproof,” and continues in their newest single, “WaveWalker.”

Citizen Way entered an exciting new musical direction with their smash hit “Bulletproof” that goes to the next level with ”WaveWalker.” The music features strong pop-driven sounds influenced by everything from 80’s dance songs to modern hip hop, and most of all, each other.

While Ben is the primary songwriter, each member of the trio offers a unique contribution to the final sound. “Since we’re all so different with different musical tastes, we’ve learned how to incorporate those into our music,” Daniel says. David’s hip hop background is evident in the music’s beats, while Daniel brings his impressive guitar skills to the band’s music. Ben met and started mentoring Daniel in 2007 when he was just 11. The group often jokes that he’s since surpassed him. “He’s truly one of the best and the brightest, and such an incredible performer,” Ben says.

With so much history together, it’s no surprise that the trio gels well together both on and off the stage. They’re great friends whose chemistry between them –both musically and personally –is impossible to miss. “Since we’re all buddies, we find each other’s strengths and how it all works together during a show,” Daniel says. As Ben puts it, “We’re kind of like Optimus Prime; as musicians, we’re all so different and unique, but we come together to form something that’s greater than ourselves.”

Having friends as bandmates makes what can often be a tough job rewarding. “This is a really awesome way to live out the calling on our lives,” Ben says. “As hard as it can be at times, we wouldn’t have it any other way.”

This year, David and Daniel are relocating from Wisconsin and Illinois respectively to join Ben in Nashville, Tennessee, marking a new, more unified season for Citizen Way. “We’ll all finally be in the same city again,” Daniel says. “It’s an exciting time for us. We can’t wait to see what new and different styles and flavors we’ll be able to explore together.” In this time of new opportunities, growth and whatever else the future holds for Citizen Way, they know their mission will never change: “We are citizens in the Kingdom of God following in the way of Jesus.”

With a VIP ticket, you receive:

VIP tickets must be pre-purchased and only 150 tickets will be sold!  Reserve yours today!