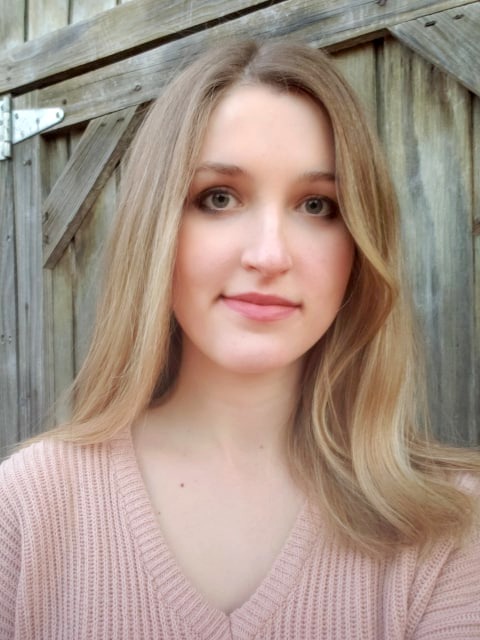 Meet Elodie, our new French Interpreter/Communications Assistant. Elodie’s particularity resides in the fact that she has a multicultural background. Born in Ukraine, her family moved to France when she was 6, and she would move again later, this time to the United States.

Elodie started by studying Foreign Languages Applied to Business for her bachelor’s degree, then, she graduated with a master’s degree in International Communications from the University of Lyon 3. She had the great opportunity to study at Truman State University for a year as an exchange student, and she strongly believes that it was God leading her there. Indeed, during this year, Elodie met the one who would soon become her wonderful and loving husband. Something she hadn’t expected to happen. The happy couple got married at the beginning of 2019, and Elodie settled in Kirksville.

Growing up as a non-believer surrounded by a very secular culture, Elodie was all in favor of abortion… until she became a Christian about three and a half years ago. Her new belief led her to serious questioning, research, and introspection. Eventually, Elodie came out of it with a strong desire to serve women and defend the unborn babies. Her new passion brought her to Lifeline. She loves being the mediator between the French-speaking women coming to the clinic and the team, assisting them in an environment of trust and kindness. In addition, she also does graphic design for Lifeline’s social media and events, as well as research and writing for the blog.

Elodie considers herself very fortunate to work among a team of mature Christians whose hearts are set on helping the women in the community. She enjoys spending her free time with her family on Facetime. Her mother is the definition of generosity and hard work, while her dad is a great person to talk and debate on any subject. Finally, Elodie has always admired her brother and his talent for drawing. He is now a tattoo artist who follows her everywhere with a needle.

Elodie’s ambition is to positively impact the French culture by her research and writings on relationships, love, and abortion. A difficult task, but in times of discouragement, Elodie likes to remember Ephesians 3:20 “Now to him who is able to do immeasurably more than all we ask or imagine, according to his power that is at work within us”.